Each year our annual Unified Program Training Conference is held to train and educate regulators and
industry on a variety of topics. In an effort to provide training opportunities for those not in attendance,
the CUPA Forum Board has videotaped specific classes for subsequent posting on the CUPA Forum
website. During the videotaping, both the instructors and their visual aids (PowerPoint for example) are
captured.
This project is to edit the recorded footage, synchronizing the presenter and visual aids. The desired
approach is to start with a narrative insert (for example the name of the presentation and speaker), and
to have the video transition between the presenter and visual aids throughout the course, rather than a
static video of the presenter. In addition, specific videos may be identified by the Project Manager or his
designee to be used for certification or continuing education credit. Each of these videos should have a
mechanism to ensure students watch the entire video and track viewer progress. This may be in the
form of video stops or other tools to ensure students don't just turn on the video and walk away. 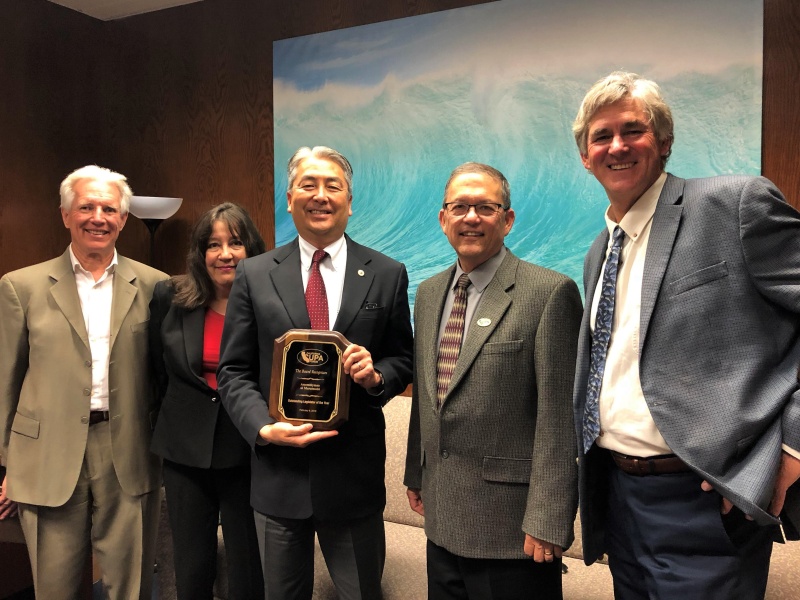 April 10, 2018 - In the bustling halls of the State capital building during this time of year, Assemblymembers and Senators are busy going to numerous different committee hearings and meetings to discuss the latest offerings of bills. Consultants and lobbyists are frantically trying to coordinate and discuss their latest amendments or positions while making their way to the same committee hearings to voice their support, opposition or concerns with any number of pending bills. In the middle of the fray, Assemblymember Al Muratsuchi who represents Californias 66th Assembly District in the South Bay of Los Angeles, took a few minutes in his office to receive a group of local representatives of unified program agencies. Members of the CUPA Forum Board were honored to present Assemblymember Muratsuchi with the Legislator of the Year award for his 2017 work on a suite of bills to enhance public safety and protection in communities near refineries. Executive Board member Marie Woodin (Sacramento County) led the presentation with Bill Jones (Los Angeles County), Legislative Issue Coordinator, Randy Sawyer (Contra Costa County), Cal ARP Issue Coordinator and Justin Malan (California Association of Environmental Health Administrators) echoing their thanks and appreciation for his bills and willingness to discuss their local perspectives during the legislative process last year. Following the presentation, attendees discussed the upcoming Environmental Safety and Toxic Materials Committee hearing for AB 3138 designed to enhance penalties for Cal ARP facilities. Congratulations to Assemblymember Muratsuchi and heres to his continued support for public and environmental protection.

The Program 4 CalARP Program Regulations for petroleum refineries were approved and finalized by the Office of Administrative Law on August 3.

Markets and regulations are forcing companies active in the nations largest state electronics recycling program to landfill CRT glass. The move is legal, but its raising difficult questions for the many processors that have publicly vowed to avoid disposal.

For instance, visitors to the website of processor e-Recycling of California are told that leaded glass is refined to make new CRTs or is used as feedstock for closed loop recycling.

But data from the state of California shows the company sent approximately 25 million pounds of CRT glass to landfill in 2016.

In an interview with E-Scrap News, Russ Caswell, general manager of e-Recycling of California, acknowledged the company is in a bind when it comes to communicating how its handling CRTs.

Its all being handled per state and federal rules, but if some portion of it is going to landfill, maybe we shouldnt say recycling, Caswell said. We would absolutely prefer to be recycling it. I can tell you right now, if someone came up with a recycling option and the state approved it, wed be all over it.

Caswells company is far from the only processor in the state struggling to fulfill recycling promises due to CRT market realities.

Disposal of CRT glass has been allowed under the California program since 2015. Citing the lack of consistent and available downstream recycling outlets, regulators authorized the disposal of leaded glass in hazardous waste landfills and the disposal of panel glass in municipal solid waste landfills. The authorization was re-adopted last year and will run until September 2018.

Initial data from the state suggested about half of the 77 million pounds of CRT glass handled by state program companies in 2016 went to landfill. More detailed data obtained by E-Scrap News, however, shows at least 60 million pounds of the material more than three-quarters of the total headed directly to landfill.

For instance, ERI, one of the nations largest e-scrap firms, landfilled all of the nearly 8 million pounds of CRT glass it handled within the program in 2016.

However, all the companies listed above have included language in online marketing materials that strongly suggests disposal is either banned or avoided, according to an E-Scrap News analysis.

ERIs website notes, ERI is committed to ensuring no part of your device ends up in a landfill or is exported abroad, and holds it partners to the same standards. And the ECS website states the company offers the most sophisticated, full-circle recycling process in the world to handle CRTs.

Before being contacted by E-Scrap News for this story, the sites for both ERI and ECS used more direct language, with ERI noting a strict zero-landfill, zero-export policy and ECS stating that electronics are recycled instead of being dumped in a landfill or shipped overseas. But that verbiage has since been removed.

IMS warns of the astronomical and lethal ramifications of landfilling. PC Recycle states that the companys first priority is keeping electronics out of landfills. And Onsite Electronics states, We properly dismantle and recycle all materials.

Companies say their hands are tied

Executives from those companies that could be reached for comment echoed the sentiments of Caswell, noting that the landfill is their only viable option right now.

In a statement, ERI co-founder Aaron Blum said, Our ability to divert material away from a landfill is not always a decision we get to make. Blum, who is also the companys chief compliance officer, added the company has a zero landfill mission and noted 95 percent of the material ERI receives nationwide gets recycled. The company also noted all of its landfilled material goes to hazardous waste sites.

While ECS managed to find a smelter in South Korea called Korea Zinc for its leaded glass late last year, the company continues to landfill panel glass in California, according to state figures. Ken Taggart, executive vice president at ECS, said in a statement that regulatory restrictions are to blame.

ECS maximizes recycling and maintains a landfill-avoidance policy for all residuals that can be legally recycled, and for which there is the technology, demand and capacity, Taggart stated.

Paul Gao, CEARs owner, meanwhile, said zero landfill is an aspirational goal for his company. Our policy or our goal is toward 100 percent recycling and right now we explain to customers were achieving 95 percent, Gao said. Thats all we can do right now.

IMS, PC Recycle and Onsite did not respond to numerous requests for comment for this article.

The squeeze on processors is being driven by the fact that the only avenues for actually recycling California glass have dried up.

Under California law, leaded CRT glass can only be recycled in one of two ways: as part of a glass-to-glass manufacturing process or at a lead smelter. This eliminates using leaded CRT glass in other products, such as tiles. Non-leaded glass, meanwhile, is allowed to be recycled into a variety of applications, such as tiles, fiberglass, bricks and radiation shielding glass, but doing so is not easy under current state regulations.

Leaders at companies handling glass in California say that this spectrum of choices allowed by the state is extraordinarily slim. Access to glass-to-glass manufacturing dried up entirely last year, which has affected the entire glass recycling industry in the U.S. California is also at a geographic disadvantage when it comes to utilizing the two most popular North American lead smelters of CRT glass, Doe Run in Missouri and Glencore in New Brunswick. Whats more, companies said demand from smelters has fallen off in recent years.

In our minds, theres really no option other than going to landfill, said Caswell of e-Recycling of California. We dont write the regulations; we just follow them.

India-based CRT manufacturer Videocon received about 6.5 million pounds of glass before its closure. Smelters Doe Run, Glencore and Korea Zinc received the rest of the material.

Continuing to look for possibilities

Jeff Hunts, who manages the California Department of Resources Recycling and Recoverys (CalRecycle) e-scrap program, said the vast majority of CRT glass continues to head to landfill in the state.

He also acknowledged that recycling solutions are hard to find.

California regulations severely limit market options for CRT glass, Hunts said. We should continue to look for recycling possibilities that are protective of the public and the environment as long as this waste stream lasts.

ERIs Blum said stakeholders are trying to solve the issue.

We are working closely with the state of California to expand the available downstream recycling options for CRT glass, Blum stated. ECSs Taggart said his firm was also actively working with stakeholders and hoped regulations would become more pro-recycling in the future to open up more downstream outlets for the material.

How should companies publicly talk about their actions until such options appear? While acknowledging the lack of options for California firms, one trade association representative suggests just being open and honest.

If I were a recycler and I was disposing of the material in a landfill I would just come clean, said Billy Johnson, chief lobbyist for the Institute of Scrap Recycling Industries (ISRI). [Otherwise], its a recipe for disaster.

Most member data is currently "view only". We will restore access to all data over the course of the next few months.

We hope you enjoy the new website, and if you need to contact us please use the "Leave A Message" form.

Short recap of the California CUPA Forum Training Conference for 2017.